I noticed that a few of my favorite objects had arranged themselves on a corner of my desk. 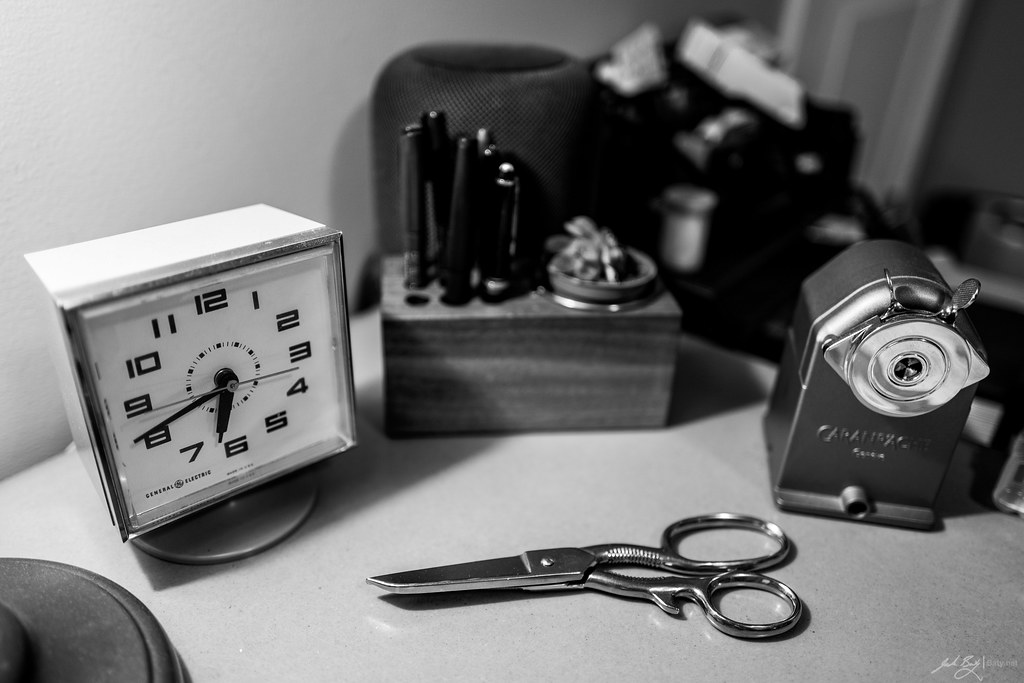 General Electric alarm clock. I had a clock just like this on my desk when in high school, maybe earlier, and have used it ever since. It finally died a couple years ago so I replaced it with an identical model found on Etsy. I plug it in and it tells me the time, quietly and accurately, until Daylight Saving Time or a power outage. So, maybe two or three times a year. When I do have to adjust the time, I do it by turning an obvious knob on the back of the clock. A minor inconvenience in exchange for simple, pragmatic time-keeping on a mid-century device.

“The Planter” by Dudek Modern Goods. A beautiful, hand-made solid block of walnut. I love its minimal design and the little succulent I have in it. It holds all of my favorite pens at the ready. Speaking of favorite pens, the one on the right is a Montblanc rollerball. I was given the pen in 1991 and I still use it regularly.

Caran d’Ache Pencil Sharpener. Now here’s an over-engineered delight for sharpening pencils. A lovely, precise “sharpening machine” with the cutest little drawer for collecting shavings. This sharpener is reason enough to use pencils and it does a wonderful job.

Ernest Wright Turton Scissors. I have no doubt that these scissors will become a family heirloom. Just look at them. I’m left-handed, so the slight curve of the blades means that I don’t have to awkwardly twist my fingers to get a clean cut. I love them. I love the idea of them.

I was just able to log into Flickr with my normal email address. No longer requiring Yahoo is a welcome, long-awaited change

Self-driving cars will be considered unthinkable 50 years from now Meredith Broussard, Vox: The simple explanation for why this situation didn’t escalate: the unspoken social contract of the bus driver’s authority